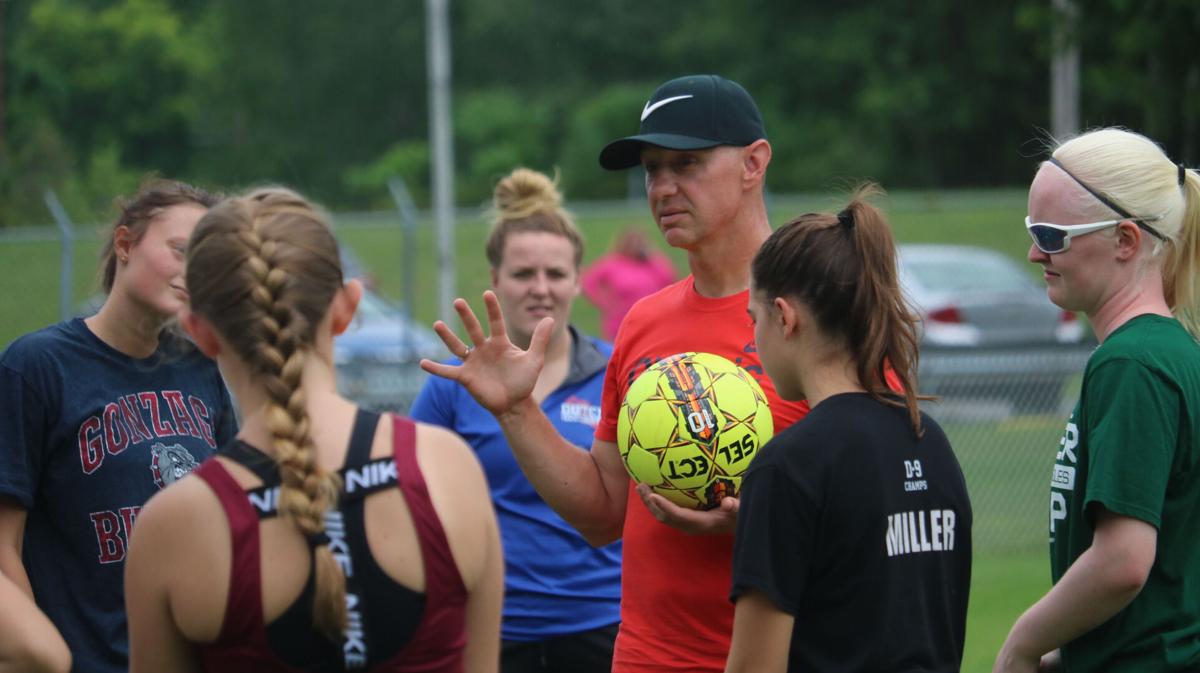 Warren head coach Jeremy Bickling talks to his team prior to Sunday's practice at Memorial Field on Sunday. Bickling will guide the Pennsylvania squad at this year's NY/PA Corporate Cup Soccer Showcase being held at Bradner Stadium in Olean, New York. The Keystone State girls have won the last two games. 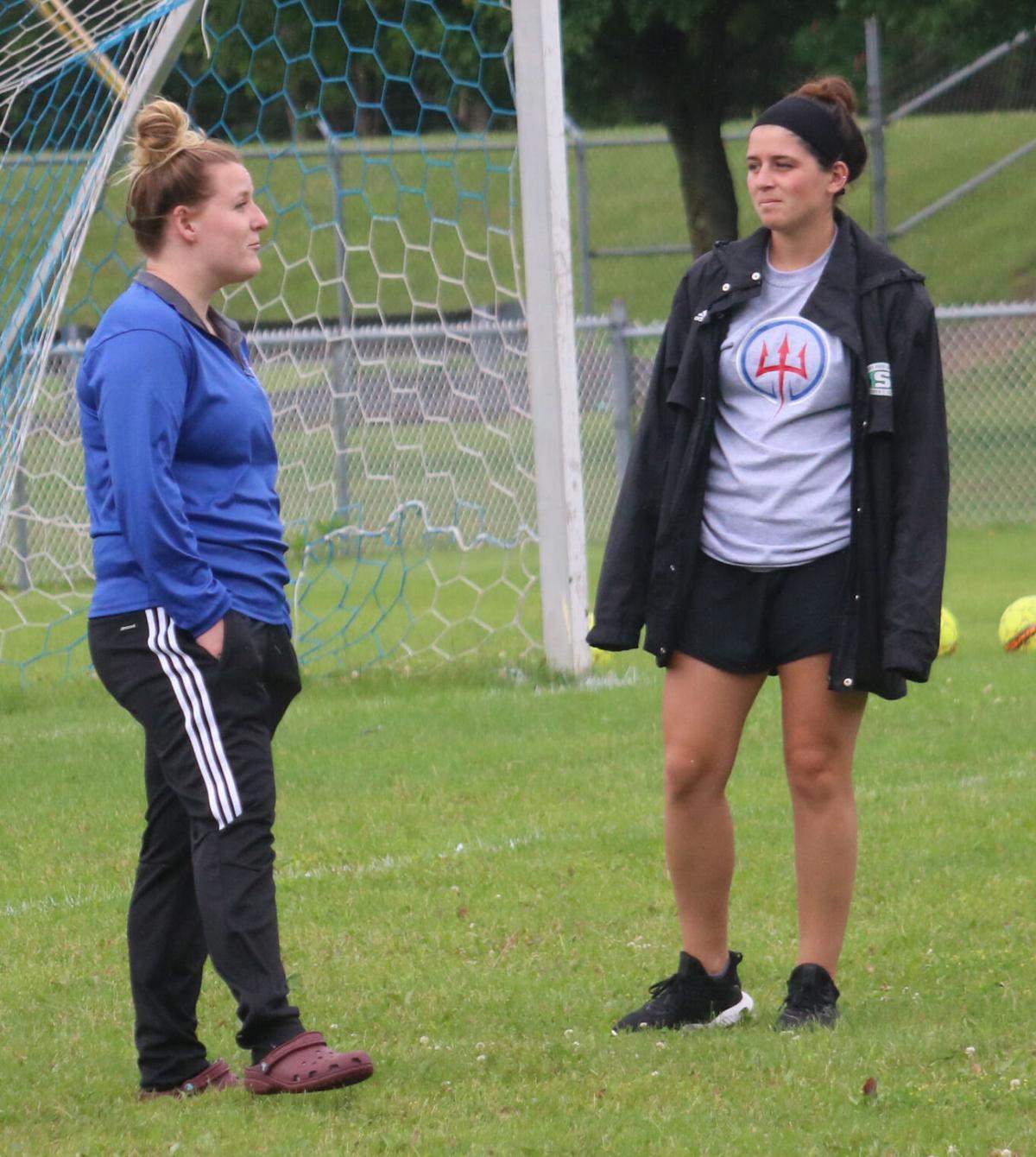 Lady Dutch head coach Samantha Zimmerman (left) and Brockway coach Juli Esposito will assist Jeremy Bickling's Pennsylvania team at this year's NY/PA Corporate Cup Soccer Showcase being held at Bradner Stadium in Olean, New York. The event will be held on Sunday, July 25. The girls will play at 5 p.m. and the boys at 8 p.m. Admission is free.

Warren head coach Jeremy Bickling talks to his team prior to Sunday's practice at Memorial Field on Sunday. Bickling will guide the Pennsylvania squad at this year's NY/PA Corporate Cup Soccer Showcase being held at Bradner Stadium in Olean, New York. The Keystone State girls have won the last two games.

Lady Dutch head coach Samantha Zimmerman (left) and Brockway coach Juli Esposito will assist Jeremy Bickling's Pennsylvania team at this year's NY/PA Corporate Cup Soccer Showcase being held at Bradner Stadium in Olean, New York. The event will be held on Sunday, July 25. The girls will play at 5 p.m. and the boys at 8 p.m. Admission is free.

Twenty-two of the girls on the Pennsylvania roster were underclassmen during the 2020 soccer season. Fourteen played in last year's 3-2 win over New York at the NY/PA Corporate Cup Soccer Showcase. The talented squad will be seeking a third-straight victory on Sunday, July 25, at Bradner Stadium in Olean, New York (5 p.m.)

The match will be followed by the boys' game which will kick off at 8 p.m. It will be the fourth game for the girls. The Empire State captured the 2018 contest 4-1, but PA, coached by Ridgway's Greg Maddelena claimed the Cup with a 1-0 win in 2019. The boy's games started in 2017. The Keystone State won last year's match 4-1 after losing the first three.

"I think we have an outstanding team, so I'm excited to see them play," said Pennsylvania head coach Jeremy Bickling prior to a recent practice in Johnsonburg. He was an assistant last year.

Watching the talented group become a team is an excellent experience according to Bickling, who will be entering his seventh season leading the Lady Dragons.

"As a coach, I enjoy it a lot. Participating as an assistant last year was nice to get to know all the girls and see them throughout the season after meeting and working with them last summer. It's a nice change to get to know them as teammates and players. Also, I get to help versus [opposing them]," he said.

The team was announced in April after tryouts. This year's group comprises players from Bradford, Coudersport, Curwensville, DuBois, and Warren. Kyla Johnson from the Lady Dutch was selected for the fourth time but will not be playing. She was joined on last year's squad by 2020 St. Marys graduates Lauren Eckert, Kaylee Muccio, and Brittany Shaw, and Elk County Catholic's Olivia Sorg and Kane's Victoria Hallberg.

Bickling feels it's a plus for underclassmen to be a part of the event.

"I think the girls that come here and participate, especially the younger ones, go back to their teams and the high school players they know and share the experience with them. So it's a positive experience, and they're getting others interested," he said.

All involved praise the efforts of co-founders Kris Linderman and Dave Talbot of the Olean Soccer Club who have developed the Corporate Cup into the premier regional soccer all-star event.

"They make it easy for the players, coaches, and parents. The amount of opportunity these girls have because of the time they put in is great. Everything runs so fluidly because they're so organized and have thought everything out. They handle everything before it's even an issue for us," said the PA coach.

Last year's game was initially set for May and eventually moved to Aug. 2 due to COVID-19. In the past, it had been played at the University of Pitt-Bradford, but moved to Olean. As a result, games were played with limited fans. Bickling is looking forward to seeing a huge crowd.

"I think last year there was always a bit of fog over everything because we had to do things differently from our normal routine. I'm excited to see soccer feel and look like it normally does. I'm excited to see the girls play in front of a full stadium. I think they're going to put on a great show," he said.

"I can't imagine they've lost the couple of years and are coming into the game willing to accept that again. We're blessed. We have a super talented team. I'm fortunate to be able to coach these players that are so experienced. I think it will be tough for New York. This is a really good team. So, it's going to be tough for them, but we'll see," he said.

The Keystone coach talked about his team's make-up.

"We built this team based on a high level of talent. With that talent, we feel we can move players around because they're so good at soccer. I saw last year we had to change some things we started out with quickly and found the changes worked well. We found the chemistry, and we utilized that the rest of the way. I think that will be [the same] this year. We have good coaches. We'll work things on the fly and straighten things out if we have to so the girls can have success on the field."

Several college scouts will be focusing on the game – another added bonus to the players.

"I think there are a lot of opportunities for these girls to play in college. Those athletes have different experiences. I hope all these girls utilize their ability to go and play at college and have that experience, that structure, and the ability to bond with players from all over the country while also getting an education," Bickling said.

Admission to Bradner Stadium is free. You can stay up-to-date by going to the NY/PA Corporate Cup Soccer Showcase Facebook page.