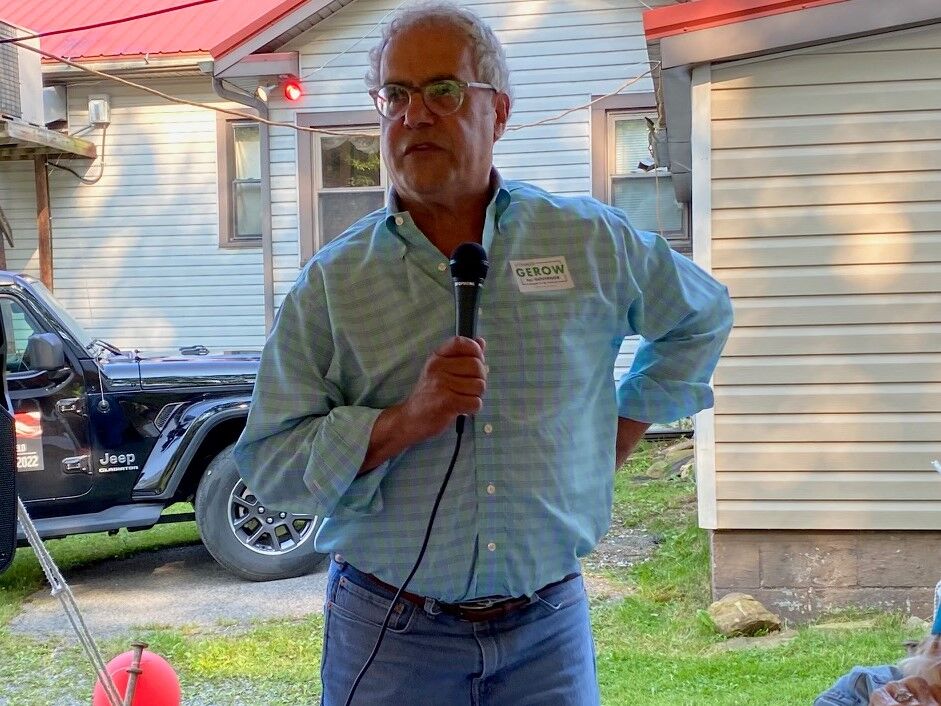 As a candidate for Pennsylvania Governor in 2022, Charlie Gerow spoke to the Elk County Republican Party during their summer picnic on Saturday in Weedville. 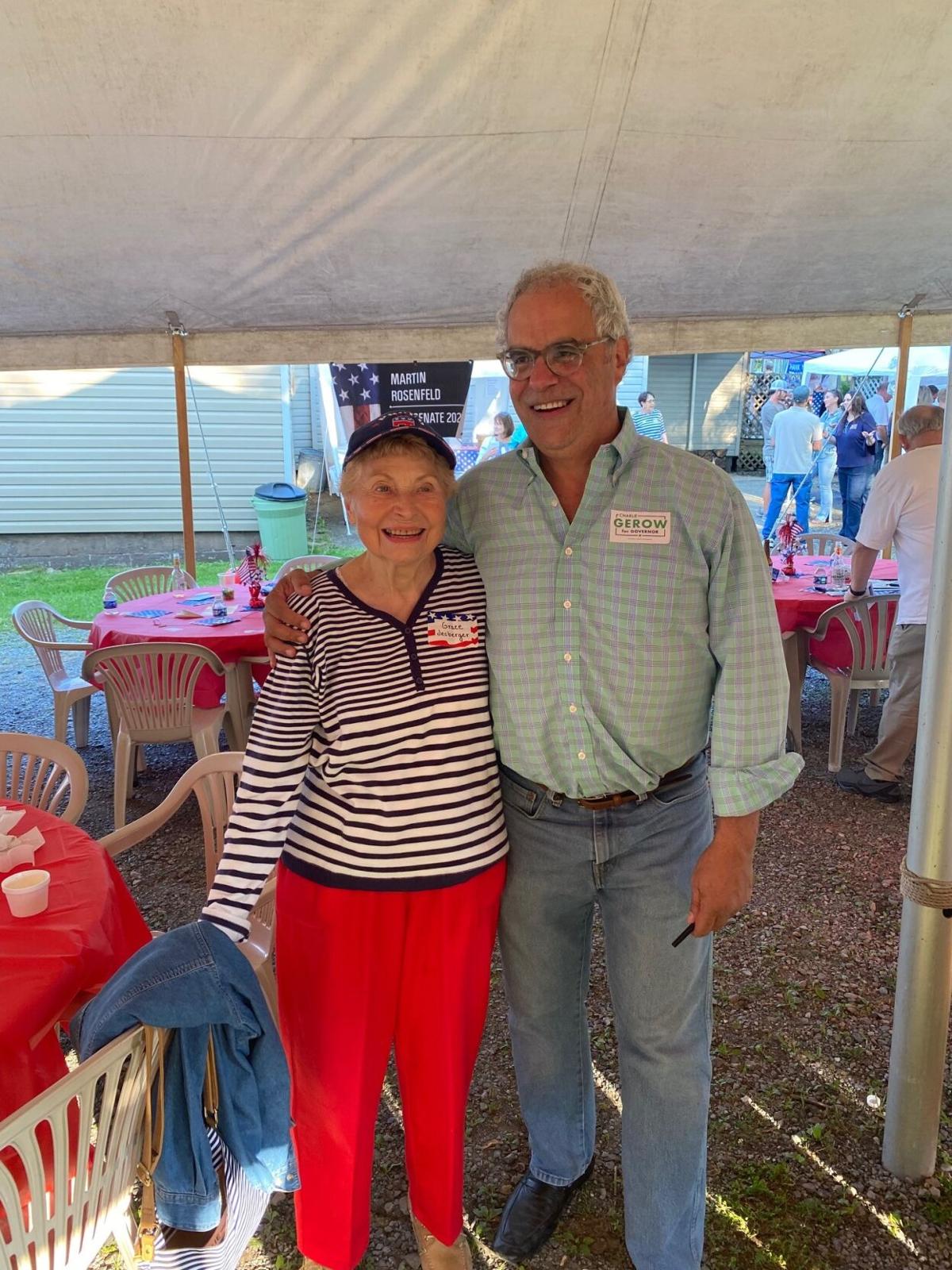 Elk County's Republican Party matriarch Grace Jesberger has been a longtime friend of Charlie Gerow, from Reagan's first campaign for President in 1976. She enthusiastically endorsed Gerow and introduced him at the Elk County Republican Picnic on Saturday in Weedville.

As a candidate for Pennsylvania Governor in 2022, Charlie Gerow spoke to the Elk County Republican Party during their summer picnic on Saturday in Weedville.

Elk County's Republican Party matriarch Grace Jesberger has been a longtime friend of Charlie Gerow, from Reagan's first campaign for President in 1976. She enthusiastically endorsed Gerow and introduced him at the Elk County Republican Picnic on Saturday in Weedville.

ELK COUNTY--Charlie Gerow characterizes himself as a coalition builder who can get things done by bringing sometimes disparate elements together, noting his work on criminal justice reform issues "where I had Donald Trump and Van Jones working together." the longtime conservative activist said on Saturday at the Republican Picnic in Weedville. Gerow said he would distinguish himself in a primary as the candidate who will pledge to get the Legislature to pass two key government reforms.
One is a constitutional amendment to allow ballot initiatives sponsored by voters "to get their voices heard when the Legislature doesn’t act or when the governor stonewalls them." The other is also a constitutional amendment to let voters recall a governor "who thinks he or she is a king," which brought rounds of applause from the gathered crowd about the executive authority wielded by Gov. Tom Wolf during the pandemic.
Gerow is a nationally recognized leader in strategic communications and a trusted advisor to leaders in government and business. Gerow has appeared on virtually every television network and has been quoted in every major newspaper in the country. He has served as the political analyst and commentator for the Harrisburg CBS affiliate (CBS-21) for more than a decade, writes a weekly column for The Harrisburg Patriot and monthly commentary for The Regions Business and Capital Watch.
A graduate of the Villanova University School of Law, he has been a Pennsylvania lawyer for more than 35 years. He began his career as a campaign aide to Ronald Reagan, for whom he continued to work for more than 25 years, including the preparations for his funeral. He ran unsuccessfully for the state Senate and Congress multiple times in the 1980s and 1990s, then founded the Harrisburg-based public affairs firm Quantum Communications in 2001, where he serves as the Chief Executive Officer (CEO). The Harrisburg-based company specializes in strategy, advocacy, and media relations. He also serves as vice-chairman of the American Conservative Union, which hosts the annual gathering known as CPAC, and was a co-chair of Carly Fiorina’s 2016 presidential campaign.
Gerow was born in Brazil and adopted by American missionaries who later returned to the United States. He is fiercely Pro-Life and related his story, with his voice breaking with emotion at times to the gathered audience.
"When I think about adoption, I think about a little boy, born into poverty and distress in southern Brazil. His biological father left his family before he was born. His mother had little choice but to put the kids up for adoption. Before her baby was born, she went to the local mission and let them know her intention." Gerow said, while later relating that he only recently began to be so open about his humble beginnings in a favela, a type of slum in Brazil. "My mother had one simple request: she wanted her baby to be adopted by Americans. In her mind’s eye, perhaps that way her baby would be able to learn how to read, a lofty ambition for a woman in her situation."
His parents were open about his adoption and never hid it from him, but by the time he was an adult and sought to perhaps find out more about his biological family, no records remained from the slums in Brazil that exist because of historical governmental neglect. Still, he thanks God every day for his mother's request and for the wonderful family that adopted him and brought him to America. Gerow believes that he can unite the GOP and expand its appeal as a Latino immigrant who found opportunity in the United States
Gerow said he would campaign as a “conservative happy warrior,” with a focus on helping the state’s economy rebound after being shut down during the pandemic and making Pennsylvania more attractive to businesses. As a Reagan Conservative, Gerow said he would abide by Ronald Reagan's “Eleventh Commandment,” which declared, “Thou shalt not speak ill of another Republican during the primary race.
Elk County's Republican Party matriarch Grace Jesberger has been a longtime friend of Charlie Gerow, from Reagan's first campaign for President in 1976. She enthusiastically endorsed Gerow.
Gerow was recently involved in an accident on the Pennsylvania Turnpike in Cumberland County, in which a motorcyclist was killed. The accident is still under investigation by the Pennsylvania State Police. Kevin Harley, a spokesperson for Gerow, confirmed that Gerow was the driver and said he is now “cooperating fully with the investigation and will continue to do so.” “He looks forward to the State Police completing their investigations and is confident that the investigation will confirm that he was not the cause of the accident,” Harley wrote in an email. “He has been advised that he should not discuss the matter further until the investigation has been completed.”