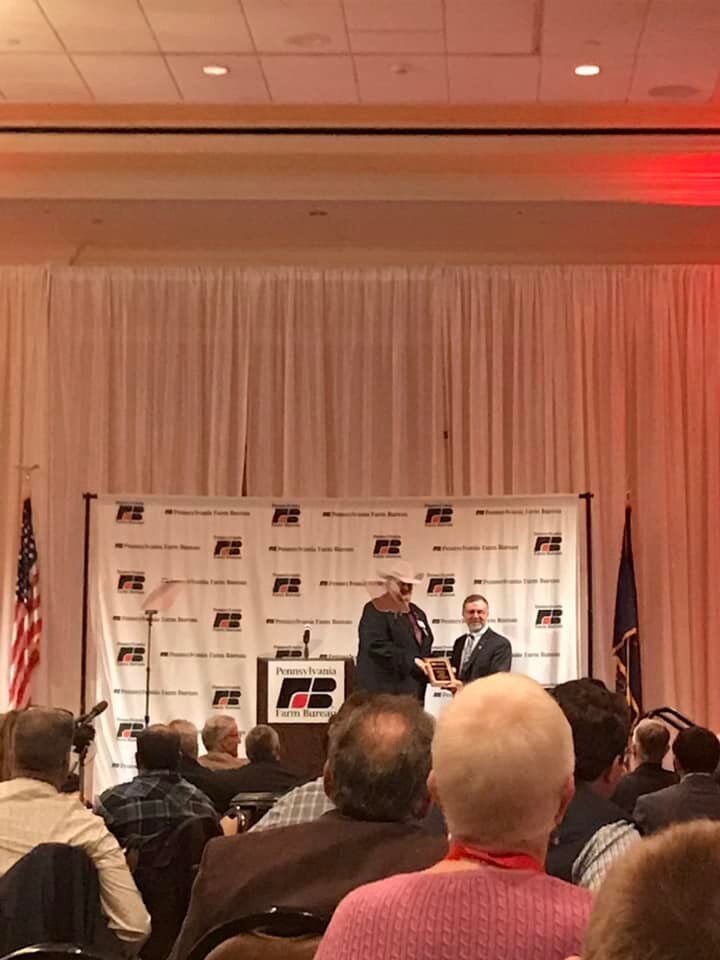 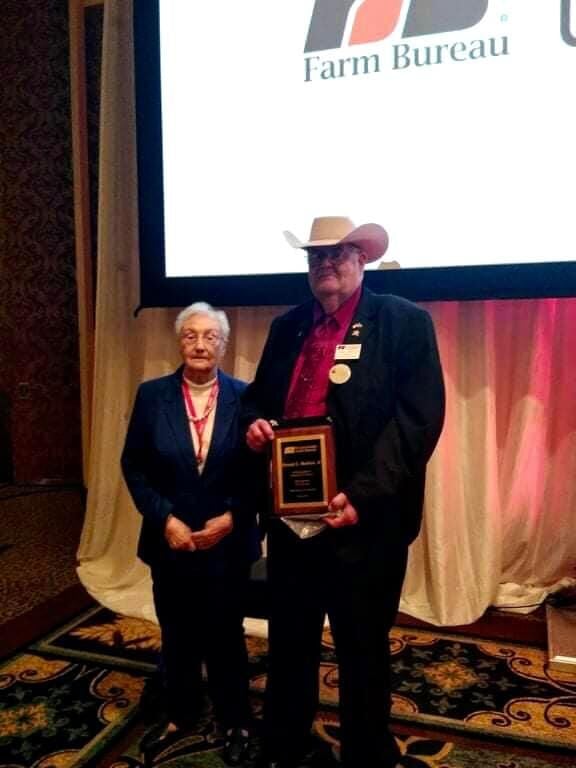 Ernie and Rosemary Mattiuz at the PA Farm Bureau annual meeting in Hershey. 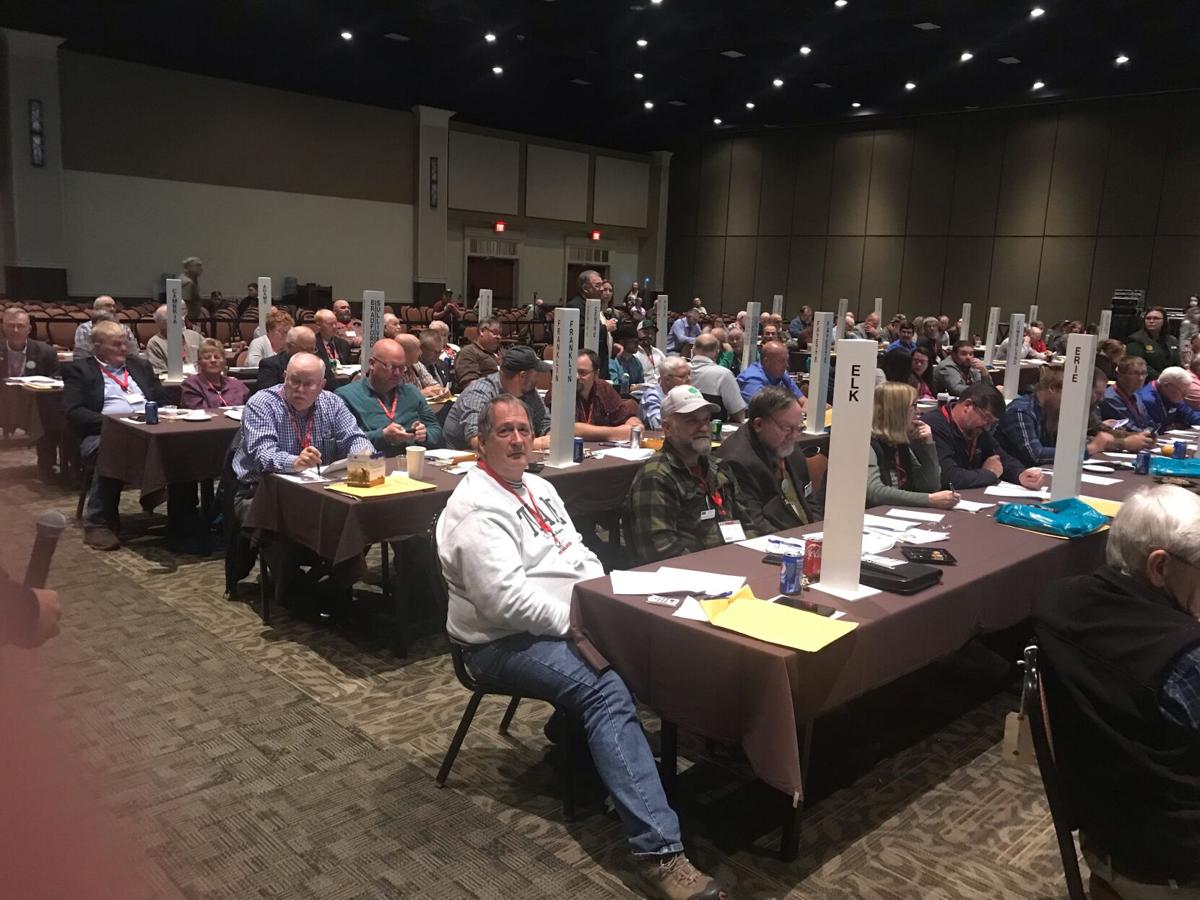 Rick Taylor from St. Marys (left) and Ray McMinn from Ridgway(right) were two of the voting delegates representing Elk County sitting on the Delegate Floor at the 71st. The annual meeting of the Pennsylvania Farm Bureau was held at the Hershey Lodge and Convention Center on November 15,16 and 17. They were part of the 197 Delegates voting on policy and leadership for the PA Farm Bureau.

Ernie and Rosemary Mattiuz at the PA Farm Bureau annual meeting in Hershey.

Rick Taylor from St. Marys (left) and Ray McMinn from Ridgway(right) were two of the voting delegates representing Elk County sitting on the Delegate Floor at the 71st. The annual meeting of the Pennsylvania Farm Bureau was held at the Hershey Lodge and Convention Center on November 15,16 and 17. They were part of the 197 Delegates voting on policy and leadership for the PA Farm Bureau.

HERSHEY--"I feel honored that the Pennsylvania Farm Bureau members elected to the leadership position from District 13 for the past eight years." said Elk County Farmer Ernie Mattiuz, "and even though I am not on the executive board any longer, I am still dedicated to both the Elk Couty Farm Bureau and willing to help out the PA Farm Bureau when they call."
The Pennsylvania Farm Bureau (PFB), in conjunction with the other 49 State Farm Bureaus, are members of the American Farm Bureau (AFB), which advocates for farmers on a national level. Like Pennsylvania, Individual State Farm Bureau's have close ties to the State Government and serve as a central information center for all farm and agricultural concerns. Pennsylvania's 57 County Farm Bureaus are the foundation of the organization. They lead efforts to advocate for agriculture on the local level, serve their communities and help the public learn about agriculture. County Farm Bureaus play a crucial role in determining what issues Farm Bureau will stand for or against. Members first vote upon policy positions at county Farm Bureau annual meetings before being considered by delegates from across the state at the Pennsylvania Farm Bureau annual meeting. The AFB and PFB organizations represent farm families engaged in all types of agriculture, from farms of every size and commodity to craft breweries, distilleries, wineries, and cideries to farm-to-table restaurants and agritourism experiences.
When farmers notice a problem, they want to fix it. Sometimes, the issues are too big for one farmer to fix. The members of the Farm Bureau work together to make fundamental changes to advance agriculture in Pennsylvania. Whether it's easing regulations on high tunnels, changing a law to allow wider equipment on the roads, or making it easier to expand agritourism, The PFB leads the way forward together. When one member has an idea, thousands of members make it a reality.
During his over 30 years with the Elk County Farm Bureau, Mattiuz has seen it all. He is term-limited to eight years on the State Board and was recognized for his service on the executive board at the Yearly Farm Bureau meeting in Hershey this past week. During his term on the State Executive Board, Mattiuz represented District 13, including Armstrong, Clarion, Elk, Forest, Jefferson, and Venango Counties.
In his farewell speech, Mattiuz stated that it did not matter how big a farming operation or how small; if they came from the heavy Ag zones of the southeast or the rugged mountains of Northwestern or Northcentral PA,  everyone involved in Agriculture has an equal voice in how this organization functions and the policies it follows. Mattiuz stated that he is encouraged by the number of young farmers involved in the policy adoption process. This shows that the Farm Bureau will continue to be the premier voice of agriculture in Pennsylvania and Washington DC.
Pa Secretary of Ag Russel Redding thanked Mattiuz for his dedication to Farm Bureau and the work he put into helping secure funding for the department and Penn State Extension service. Mattiuz was also recognized for his work along with Representative Matt Gabler in getting legislation passed that exempted Loggers in Pennsylvania from paying sales tax for the supplies needed to harvest timber in Pennsylvania. Mattiuz credited his wife, Rosemary, for their over 30 years of marriage as his partner in the farm and the Bureau, as well as his stepchildren Joann and Brian Stockman and grandson Austin for putting up with the long hours and monthly trips to Camp Hill for meetings.  President Ebert thanked Mattiuz for chairing the Wildlife committees for the last four years, where he worked to get the Pa Game Commission to update the RED tag program giving Farmers some relief with loss of crops due to deer damage.
Ray McMinn from Ridgway and a member of the Elk County Farm Bureau was voted in to replace Mattiuz on the Executive Board.