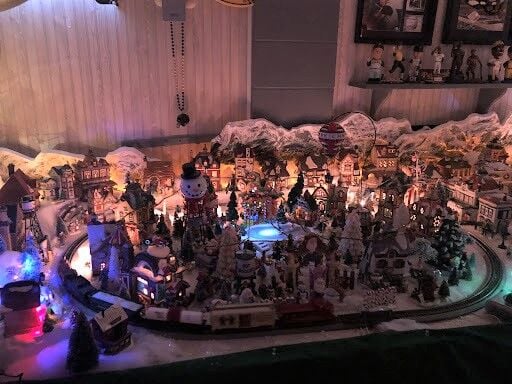 After not hosting people to see his extravagant Christmas Village last year due to the pandemic, Ridgway resident Jack Cleaver is happy to open up his home again this year for people to see his breathtaking display.

He went on to highlight that he loves to do this for the community because of the way it makes people feel. “I would like people to know that this is something that I enjoy sharing each year and I see the smiles on kids’ faces so that’s what makes it worthwhile for me-it becomes the whole highlight of my Christmas season.”

Cleaver, who was previously a school teacher, said this collection of Christmas items started off in the mid-eighties when he began collecting the Dickens’ Village Series and brought in pieces for his students to set up when they read a play version of “A Christmas Carol.”

“I would have the kids set things up however they wanted as a part of that unit at Christmas time-then I just started adding different pieces and they came from different sources, which there’s very expensive pieces-I would describe as sort of an addiction really.”

To go along with all the pieces that have to do with Christmas, there are a few favorite items of Cleaver’s in the village, including the ones of New York City,  different animals, and even the carnival.

He also noted that there are a lot of pieces that have been given to him over the years, and he makes sure that those pieces are also included in the village.

If you are about to see this village for the first time, Cleaver has some unique components in a village that he likes people to see.

“I have landmark buildings like the Empire State Building with King Kong on the sign, but I like people to see if they can find the little things that are hidden throughout the village like the Grinch or Bigfoot, or if they actually rode any of the rides for my carnival display-people point out the little things like that.”

Cleaver went on to say this year’s open display has a different meaning and that will make it all the more special.

“Christmas time is a special time that you enjoy having people in your home- it just means it’s extra special this year because of the fact that we have been so isolated-as I said before, this is the highlight of my Christmas season-making people’s day a bit brighter is a Christmas gift to myself.”

Cleaver’s home is located on 1507 Front Street in Ridgway where the display will be shown. If you cannot make it to the display during any of those four days, Cleaver will arrange a time that is suitable for you to come see it.