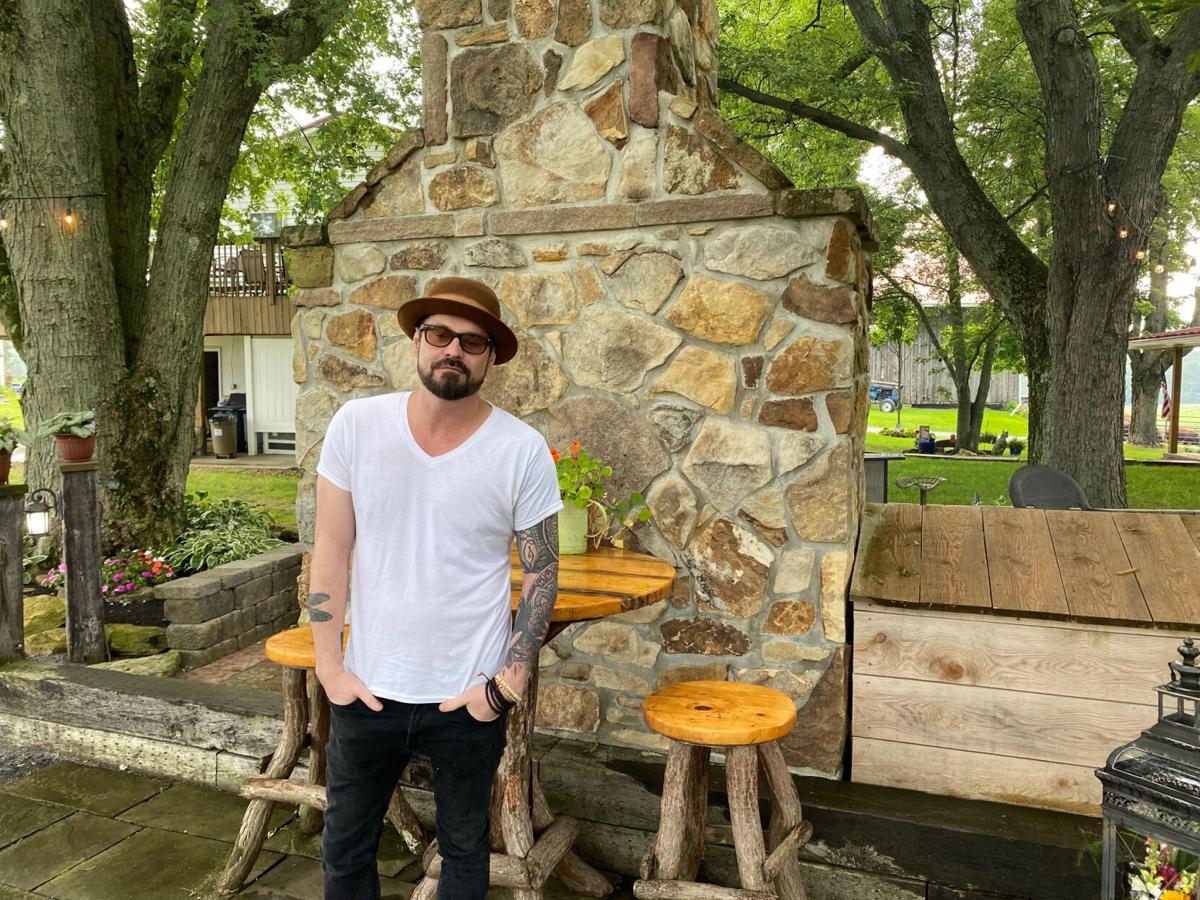 Chicago musician Jam Alker at the Kemmer Farm in Kersey for the Mecca-Mann Kaysie’s Sunshine Ride on Saturday. 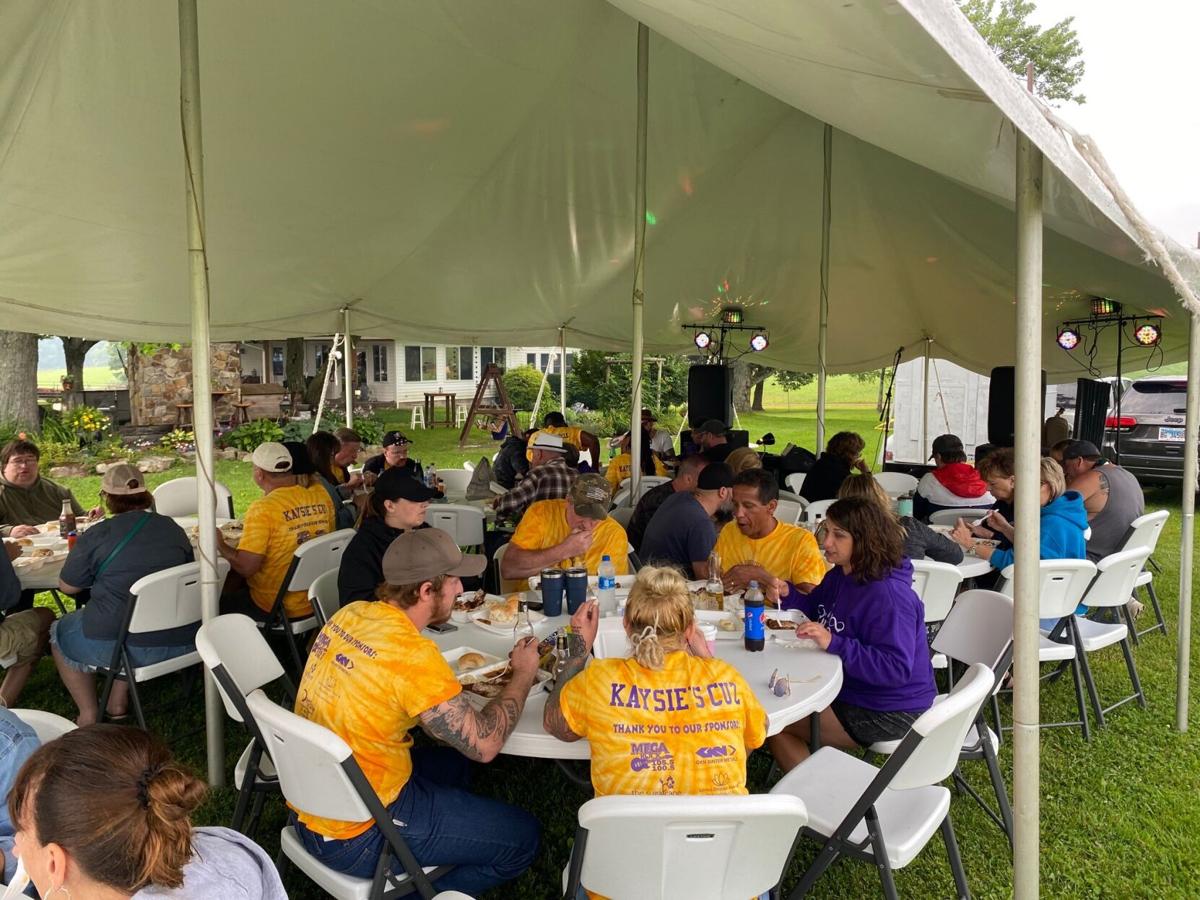 A Kemmer Chicken BBQ dinner and some great music made for a fitting end of a successful day for Kaysie’s Sunshine Ride.

Chicago musician Jam Alker at the Kemmer Farm in Kersey for the Mecca-Mann Kaysie’s Sunshine Ride on Saturday.

A Kemmer Chicken BBQ dinner and some great music made for a fitting end of a successful day for Kaysie’s Sunshine Ride.

ELK COUNTY--"A little nervous," said Jam Alker on Saturday when asked how he was feeling before getting on stage at Kaysie’s Sunshine Ride, a fundraiser for the Mecca-Mann Mission, "With the severe COVID-19 restrictions and other ongoing issues in Chicago, this is the first time in 17 months that I've performed before a live audience." He said after finishing off one of Merv Kemmer's famous BBQ chicken dinners.

His nerves did not get the best of him, and he went on to perform an inspiring show on the Pine Ridge Farm in Kersey on Saturday evening. However, Alker is not just a musician; he is a recovering heroin addict, who lost it all due to his addiction, and since getting clean in 2014, he has rebuilt his life with the help of his wife Aimee and 8-year-old daughter.

"In high school, I made the decision that I was going to be a rock star, and when I finally moved to the city from the suburbs, I pursued music as a career. I played a lot of the large clubs, did some touring, and did many things on the road you’d imagine a young musician in their 20s would do, including a lot of drug use. I also opened a recording studio, started a record label, and had made quite a bit of money, and along the way became a heroin addict." said Alker in recounting his story on Saturday afternoon.

"When my addiction took hold, I put down my music and went into a dark hole for a long period of time, over a decade. In 2014, I finally surrendered and checked myself into a treatment facility. Even though I hadn’t really touched it in all this time, I took my guitar with me, probably thinking I might need something to pass the time. Alker's eyes swelled with emotion as he recounted what happened next. "What happened instead was that writing songs became a way for me to process what had happened in my life that led to my addiction. Since I wasn’t going to be able to get high anymore, I was going to have to deal with all the difficult emotions, the anger and pain I had avoided in my addiction, and quite honestly, before my actual active addiction."

"So it was as a form of therapy that I picked up my guitar and started to write again. And I began to process all the difficult emotions I had buried so long inside myself. I was able to use music to heal a lot of the pain I’d been running from and ultimately connect to a spiritual source." In group therapy sessions at treatment, I shared my music with my peers in the treatment facility, forged connections with them, and discovered that we all went through very similar things. Through that, I learned that music is something that I can use to help not only myself but also others who’ve shared the struggle of addiction."

Once he got out of treatment, he continued to write and soon had enough songs for an album. Less than a year out of treatment, Alker went into the studio and, a few months later, released his first full-length solo album _Sophrosyne_. While Alker is a touring musician and plays rock shows around the country, that is only part of what he does. He also created a therapeutic music group curriculum with a colleague who is a clinical social worker and addiction specialist, and he leads that group in treatment centers whenever he is not touring. He speaks and performs at treatment centers, schools, and community events, like the Mecca-Mann Mission, to share his message, music, and story.

Alker is also a national recovery advocate for Soundpath Recovery, a program at Transformations Treatment Center in Florida. Soundpath Recovery is a music-based program for people struggling with addiction, so he spends a lot of time helping others fighting their own addictions.

He was so inspired by the leaders of the Mecca-Mann Mission, which began just a little over three years ago in Elk County, that he was delighted to be invited to Kaysie’s Sunshine Ride. "The drive and dedication of these amazing women and men, who have taken their pain and loss of a loved one and funneled it into a vision of a drug-free Elk County are amazing. I wish we had a thousand groups like them across this s nation, " Alker finished just before heading up to the stage to entertain all those who took part in Kaysie’s Sunshine Ride.

For more about the Mecca-Mann mission that inspired a Chicago rocker to travel all the way to NorthCentral PA, please go to their Facebook page at The Mecca-Mann Mission, Inc.