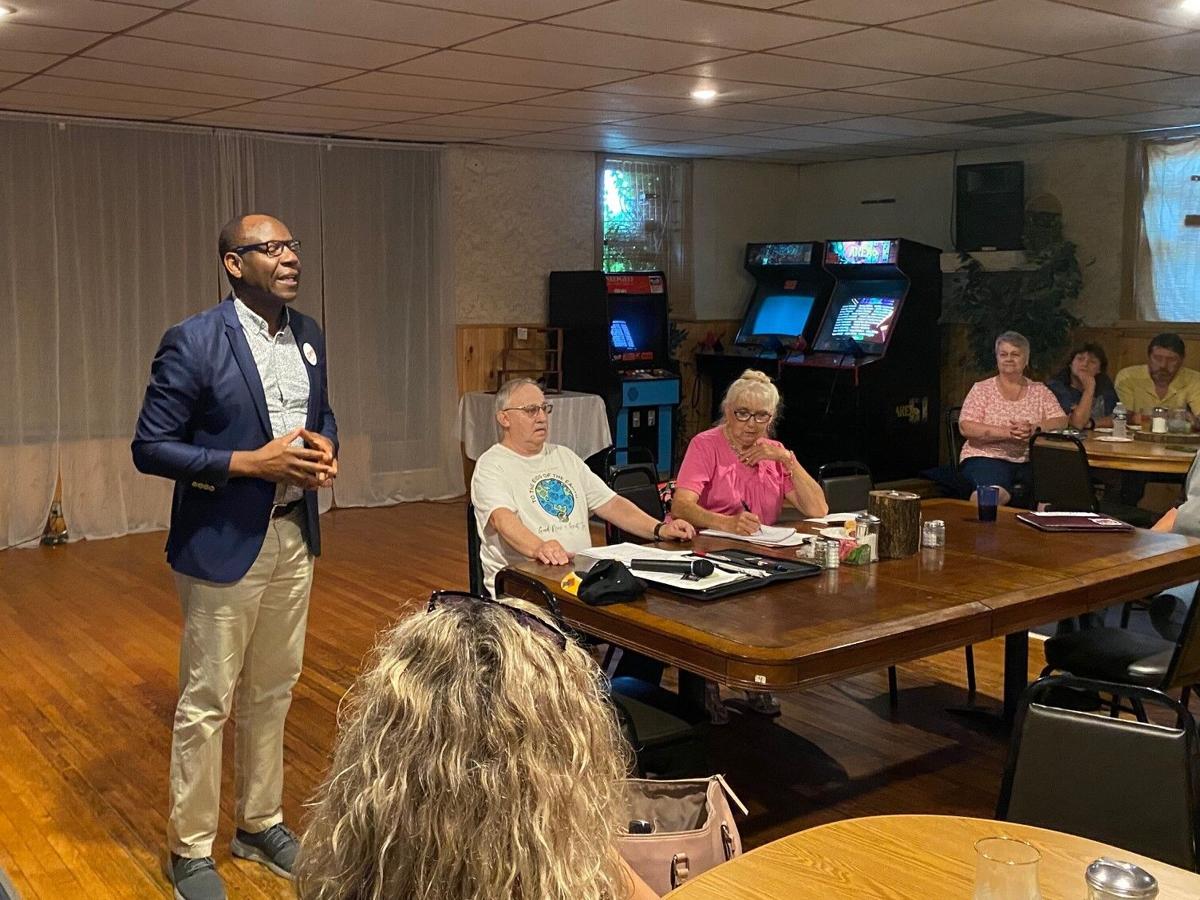 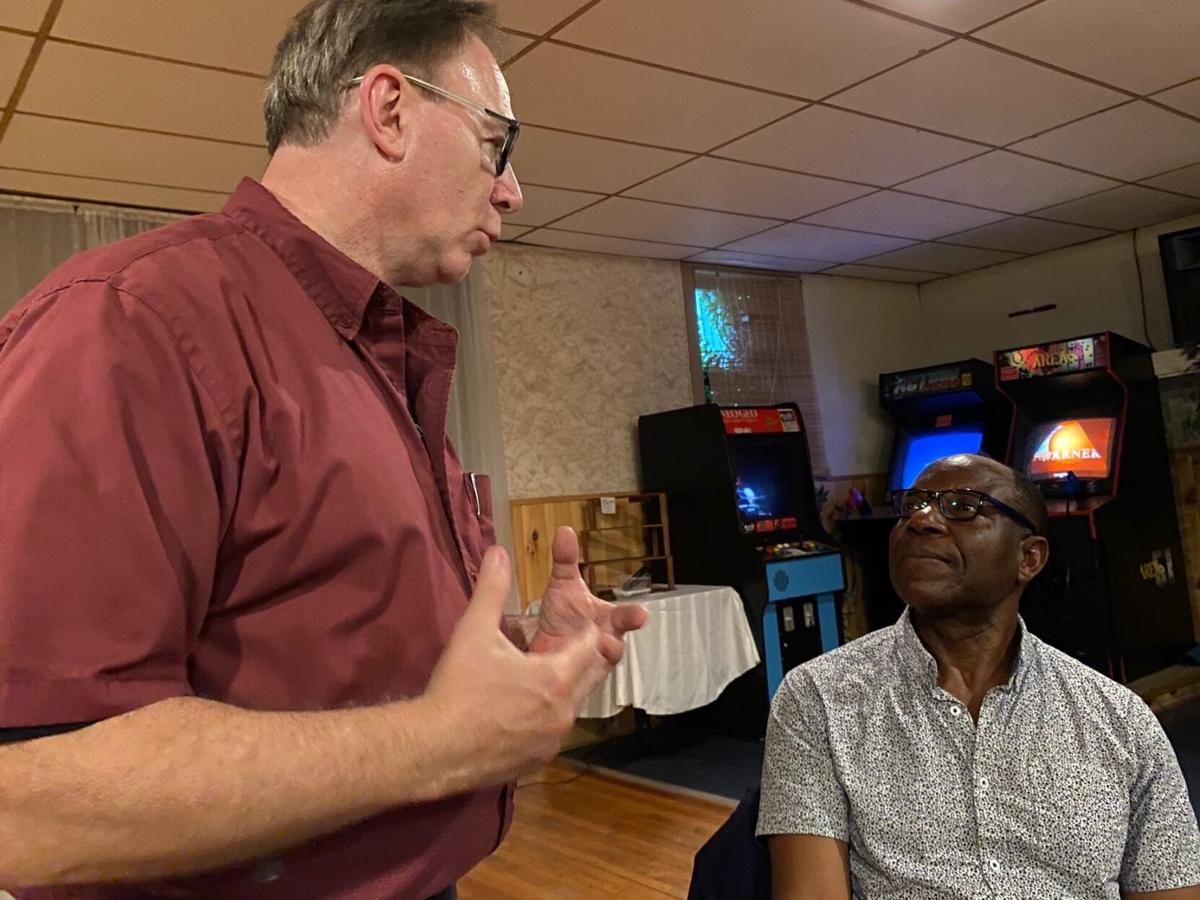 US Senate Candidate Martin Rosenfeld, a local businessman and Deputy Sheriff in Elk County, has developed a friendship with Dr. Zama after attending several events together over the past year and helped schedule Nche to make the meeting on Tuesday night in Elk County. 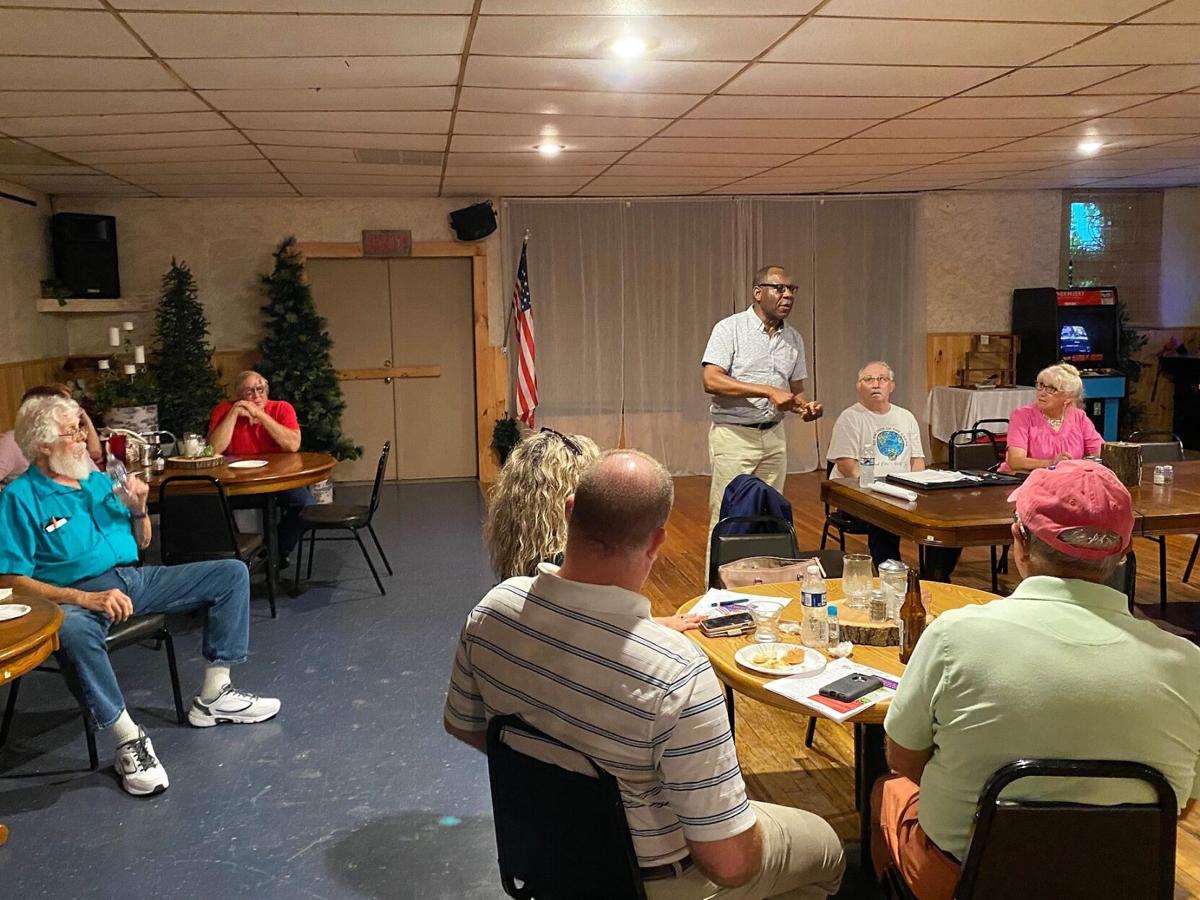 Dr. Nche Zama, MD, Ph.D. spoke for over an hour to the Elk County Republicans on Tuesday evening.

US Senate Candidate Martin Rosenfeld, a local businessman and Deputy Sheriff in Elk County, has developed a friendship with Dr. Zama after attending several events together over the past year and helped schedule Nche to make the meeting on Tuesday night in Elk County.

Dr. Nche Zama, MD, Ph.D. spoke for over an hour to the Elk County Republicans on Tuesday evening.

ELK COUNTY-- With a thunderstorm raging outside the Big Trout Inn in Weedville, the lightning was all inside as Dr. Nche Zama spoke to the Elk County Republicans about his candidacy for Pennsylvania Governor in 2022.

Dr. Nche (pronounced as En-Chay) Zama received several standing ovations at the Elk County Republican Party meeting on Tuesday, as his core messages resonated strongly with the audience. "Pennsylvania does not need another politician, said Dr. Zama, "It needs a heart surgeon."

“For too long, Pennsylvania has been sick. Our economy, schools, and healthcare system have been broken for years while Harrisburg remains in a coma. Pennsylvania should have a trillion-dollar economy that is globally competitive and strongly supported by world-class schools and a top-notch healthcare system. As an ardent supporter of educational, technological, business and healthcare excellence, I am running for governor to lead the charge and address these and other ills confronting this great Commonwealth.”, said Dr. Nche Zama.

Dr. Zama was the second of six children, raised in grass huts by illiterate but hardworking parents in Cameroon, who instilled within him the values of discipline, pragmatism, and community. When he witnessed his mother's preventable and horrific death during childbirth due to the lack of access to a doctor and proper medical care, his life’s purpose shifted forever. He swore to become a doctor so another 10-year-old child would never have to go through what he did as he watched his mother bleed to death during childbirth with the local clinic having no doctor. His father sold his property so that young Zama could travel to America for a better education.

As a teenager, Dr. Nche Zama came to the United States on a student visa with just $20 in his pocket in 1974. He was homeless for a while and lived in the YMCA until a compassionate person took him in and helped guide him on his journey to the American Dream. He earned his Medical Degree from the University of Cincinnati and his Ph.D. in Chemistry and Master of Science Degree in Management from Harvard University. His initial training came at the Cleveland Clinic, where he served as Chief Resident. He later trained in cardiothoracic surgery and pediatric cardiac surgery at Harvard Medical School and Boston Children’s Hospital, completing his specialized training in cardiac valve and complex cardiac surgery at the University of Paris, Broussais Hospital under the leadership of world-renowned surgeon Dr. Alain Carpentier.

He is recognized as one of the top cardiothoracic surgeons globally and is often sought out for his expertise. He has held positions across Pennsylvania as Director of the ESSA Heart and Vascular Institute in East Stroudsburg, Director of Cardiovascular and Thoracic Surgery at Jefferson Aria Health in Philadelphia, Chief of Cardiovascular and Thoracic Surgery at Guthrie Clinic in Sayre, and has been a Staff Cardiothoracic Surgeon for Susquehanna Health Systems in Williamsport and York Hospital in York. He founded a humanitarian organization to provide medical and surgical care to the poor and disadvantaged. On one of his global humanitarian missions, he performed the first pediatric cardiac surgery in his native country of Cameroon. A patient receiving surgery from Dr. Zama has a 99.9% chance of coming out of the surgery alive, which is an almost impossible success rate, and why his patients travel around the world for his expertise. He is a humble man and bases every one of his decisions on his Christian background and values, such as being ardently Pro-Life.

“Just like you, I see what is going on in Harrisburg. It’s broken. Throughout my career, I have led high-performance teams to strive for excellence while embracing a patient-centered philosophy. We identify a problem, propose a solution, implement life-saving measures, monitor the results, and achieve success. As Governor, I will lead the best teams to transform Pennsylvania into a globally competitive force that serves the people of this Commonwealth.”

A strong supporter of the Second Amendment, Dr. Zama said, "I have seen what happens in a country where only the Government has guns" referring to his birth country of Cameroon, "And the under both the US Constitution and the Pennsylvania one the words "shall not be infringed" resonate in my family. "I stand to tell you as Governor I will never abridge those rights."

Valuing education, he has financially supported over two dozen of his nieces and nephews through college, provides financial support for an entire elementary school for poor children in Cameroon, and as vice-chair of an American educational empowerment organization, he has contributed to the construction of a new academy in Africa to train innovative thinkers and future leaders. Besides his extensive humanitarian efforts, Dr. Zama enjoys reading, traveling, music, hiking, running, and learning new languages, adding to the six he already speaks. He enjoys spending time with his children, grandchildren, and family.

“As an ardent supporter of educational, technological, business and healthcare excellence, I am running for governor to lead the charge and address these and other ills confronting this great commonwealth,” said Dr. Nche Zama, MD, Ph.D. in closing on Tuesday night to yet another standing ovation from the Elk County Republicans.